It’s been awhile since I posted something like this and I thought it was about time.  Not sure how helpful it will be, but I took a few setup shots when I was over at MC’s photographing baby Tommy recently.  MC had several requests for his newborn photos, one being that she wanted some of them earthy, natural and that they have a lot of texture.  Finding green in the massive heatwave that is Texas right now is tough, but we did it, and with high sun!  These were shot maybe around 2 pm in the afternoon, but on a large covered porch.  The light was good and bright so I was able to put his back to the light coming in and catch just enough of the green bushes behind him.  Here is the setup straight out of camera…. 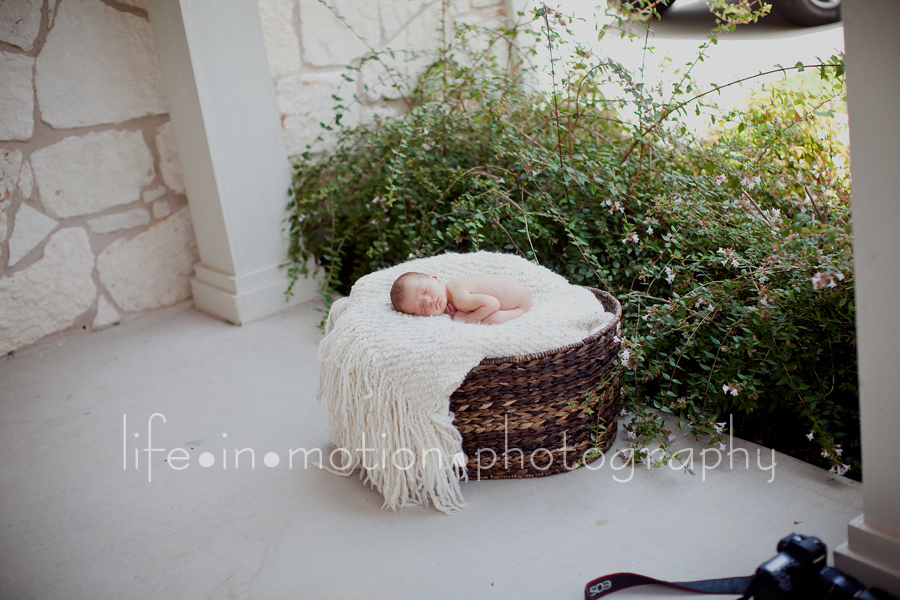 If he was a girl, I would have utilized the pink flowers and positioned him more to the right.  The basket is filled with other blankets and I think a boppy was in there too to get him to the desired height.  The front of the house is camera left and I put the basket close to the bushes for several reasons.  First, so I could have enough room to shoot and secondly, because if I brought him out from the bushes, I would have caught both my vehicle and the street in the background and bokeh.  Also, when posing the baby, start with the feet and place them where you want them first.  Then set down the bottom and gently bend the baby forward into place.  Don’t be afraid to pick up the babies head and gently turn it directly toward you so that the side of his/her face is flat against the blanket/surface.  You want to be able to see all of the eye up against the blanket and even the slightest tilt can make it appear as though the baby is looking down.  Their necks are flexible, they don’t mind.  Here are three resulting shots from this one setup…. 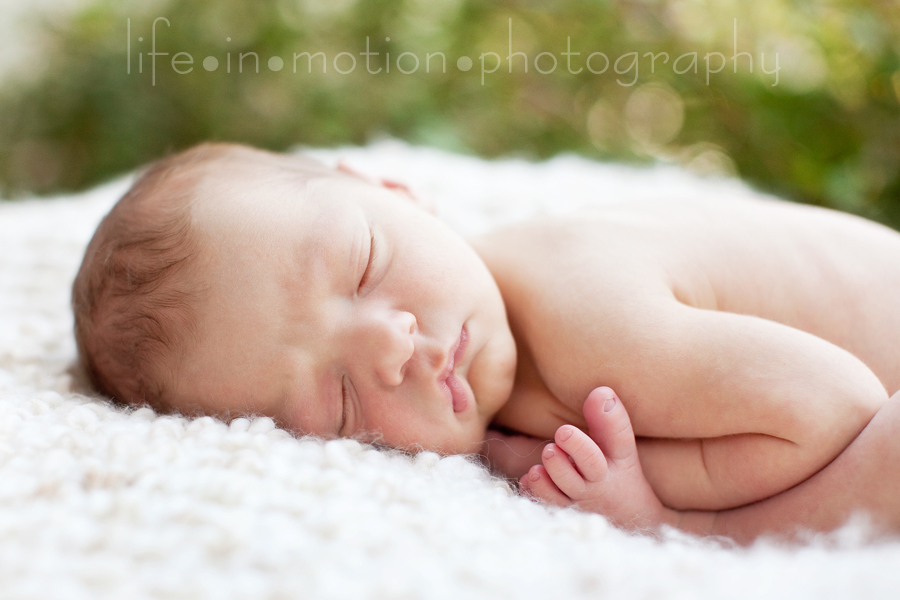 I love the bokeh in this shot.  And his little chompin’ big toe.  If you read comments here often, you know MC is a toe chomper.

And a verticle one for good measure.  Even though I love the horizontal shot above, when shooting for clients it’s a good idea to offer it both ways.  What if their wall or frames call for a verticle?  Some people choose to crop when shooting and some people don’t.  It’s possible you could crop one image two different ways, it just depends on your shooting style.  My point is, options are good. 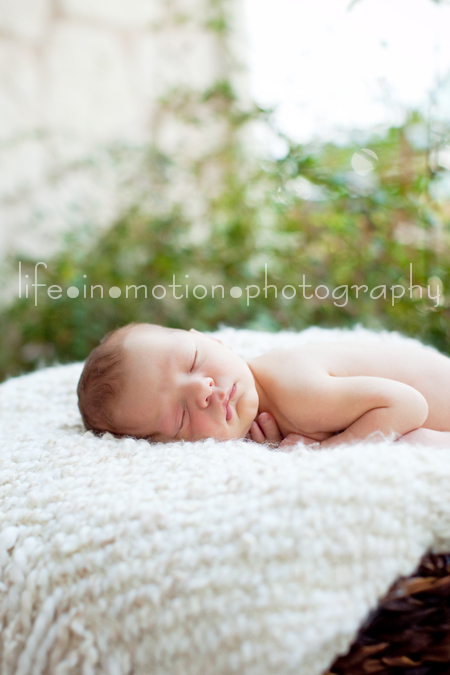 After I took this shot I decided to rearrange him a bit (actually took that first one afterwards but you get the point).  I wanted to move his leg to the outside and his arms in so that I could see more of where the toes were coming from.  You can see in the shot below that this pose is more effective just by switching the placement of the arm and leg.  My goal was to get his little hand outstretched up on his cheek, but he wanted none of it.  He’s very much a clenched fist baby, so we rolled with it.  I think this one is my favorite. I think because it’s a full body shot, he’s bendy, has chompin’ toes and you get lots of texture, green, the basket and blanket, etc.  I would love to see this one on canvas.

These posts always seem weird to me because I’m not sure if it helps anyone, but I thought I’d post in anyway!  Feel free to post any questions in the comments =)

And with that, I’m off to photograph baby Jack in a big open field at sunset!  Later!!