Teagan got a little crazy with the baby food this morning, so once again he needed a mid-day bath. He’s such a blankie boy, loves his lovey. He rubs his little face with it, snuggles with it, it’s the first thing he looks for when he wakes up, gets tired or gets out of his bath. I love it when he pulls it up over his head, it cracks me up when he’s sitting up and all of a sudden, he’s hidden under it, funny boy. I took this after his bath, he was rolling around on the bed, tangled up in his lovey. 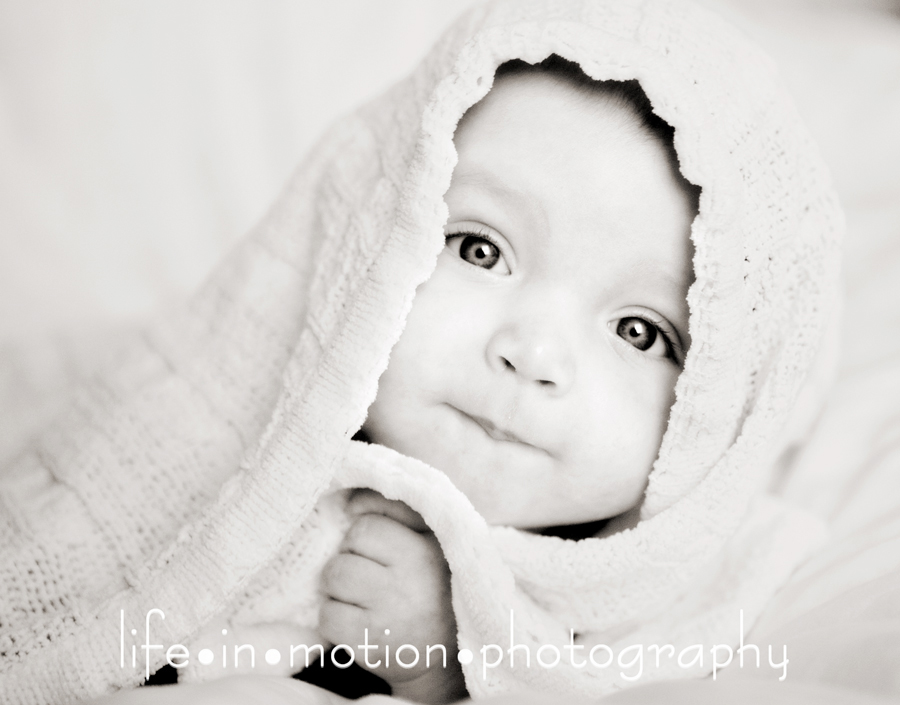 He had his 6 month check up this morning. Weighed in just under 17 lbs, still around the 40th percentile according to the growth chart created by formula companies (don’t get me started). But he’s happy and healthy. We opted to put off his shots until next week because he’s been running a low grade fever the last few days. It just seemed unfair to make him feel worse, so we’ll go back next week. He’s such an easy going baby, even when he’s sick and not feeling good. Although he did bust out the bottom lip for our pediatrician today, it was pretty comical.

I hope to have a funny little video ready to upload by tomorrow, stay tuned!

Yup, 99% of the charts used in pediatricians offices are provided to them by formula companies. Some even have the formula logo on the actual chart. Ours does. I really, really wish that pedi’s would get smart and chart babies according to how they are fed, I mean geesh, a few free forms really isn’t worth it when you’re talking about an accurate view of how a child is growing!

Now I have NOTHING against formula feeding. Ty had both formula and breastmilk as a matter of fact. My beef is that without an accurate look at how your baby is growing, taking into consideration, how they are fed, it can instill fear and uncertainty into a worrisome mom or dad. So, say a mom goes to the doctor and baby is on the low end of the spectrum on the formula form, and he’s breastfed. How many times do you think a mom leaves that office in fear that her baby isn’t getting enough to eat, leading to “oh wow, I must have a low supply, I better start to supplement”?

Personally, the next time I in, I’ll be taking a breastfed baby growth chart with me. Both for myself to see how Teagan is growing and maybe it will send a message to my pediatrician. I’ve mentioned their charts before, but what bothers me is that a lot of people don’t even realize it, and most pedi’s don’t mention it. Mommas have enough to worry about. For me, rather than putting a lot of stock into where he falls on a chart (of any kind)….does he look healthy, is he happy?

Ok, stepping down off my soap box.

If anyone is interested in a breastfed baby growth chart, you can find some here:

Kellymom.com is by far my absolute favorite breastfeeding resource!