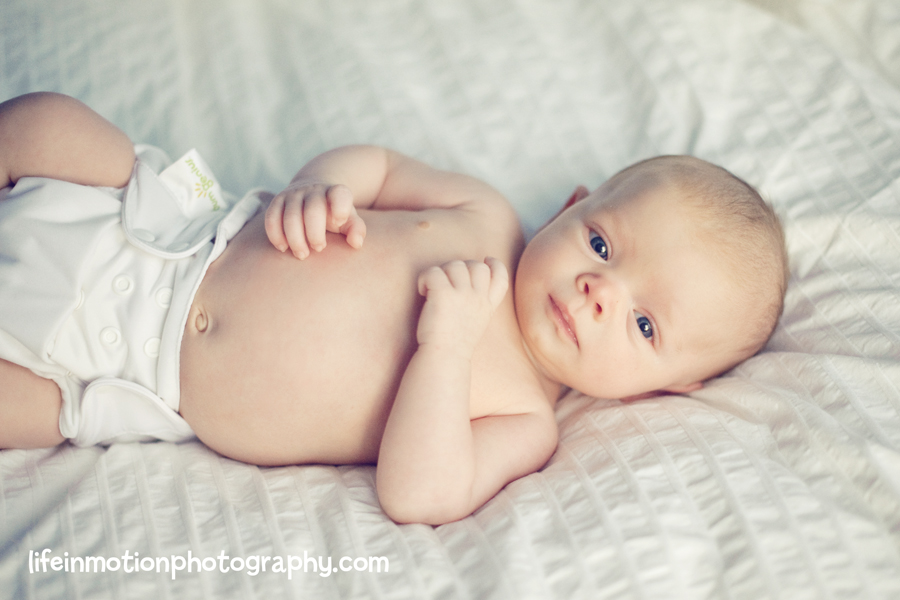 That sweet face up there is the image of a little boy who sleeps through the night.  He has been for awhile.  Once we no longer had to wake him to eat after he returned to his birth weight, he’d sleep in a 4 hour followed by a 6 hour stretch.  He’d get up once, maybe twice to eat and it usually hit just as Jase and I were getting ready to go to bed anyway.  It was a dream.  Between 6 and 7 weeks old he started sleeping straight through, between 10 and 11 hours straight.  Sounds like a dream come true right?  Yeah, the only problem is, he then calorie loads ALL.DAY.LONG.  As in, will not leave the boobie buffet for a second without screaming his head off and puffing out his lower lip in a pout.  So two nights ago I decided to do a dream feed before going to sleep.  All he wanted to do was sleep and it took some convincing, but sure enough, the following day was soooooo much better.  So at least for now, you can call me crazypants for wanting to wake up my kid so he can eat in the middle of the night.  I’m SO thankful for a good sleeper….it only took us 4 kids to get one….but I don’t mind middle of the night feedings.  Honestly, I don’t.  When you have your first, they get so much of you and you get to be alone with them a lot.  And with Taryn, Ty was in school, so I got a lot of alone time with her too.  But with Teagan Jude, Taryn was a toddler, so I really looked forward to my alone time with him, quiet and snuggly in the middle of the night, it was our time together and I cherished that.  And the same goes for Jonah.  Our house is crazy busy, crazy loud, and with homeschooling, the other kids are always here.  I love that they are always here and they get to bond, but I love alone time with my baby too.  For the time being I’m going to continue to dream feed in hopes that it’ll give us a few easier days and so that I can enjoy the sweet baby snuggles while they last.