Another milestone. But it’s really all about the backpack. 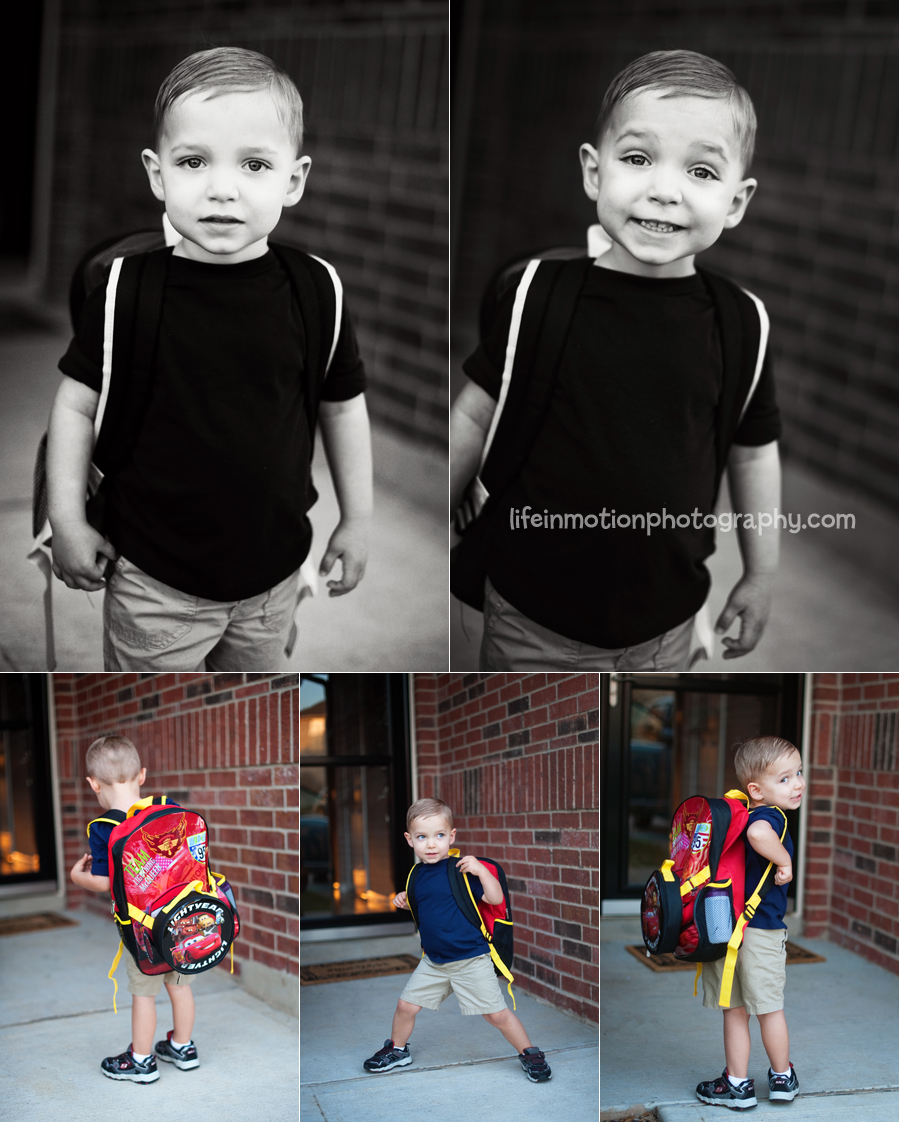 I’m struggling with which blog I should post this on, this one, or finding our new normal.  I suppose it belongs on both.

Duder is excited.  SO excited.  About school and especially his Lightning McQueen backpack.  I am SO not a character clothing mom.  In fact, I cringe each time my kids wear things like this.  But by my 3rd kid, I’ve learned to let some of it go and only cringe when they aren’t looking.  And Duder asked for a Lightning McQueen backpack every single day for a week.  I caved.  I’m so weak.  What can I say, I have a soft spot in my heart for my little guy.  Last night, after a horribly long day, Ty and I stopped to pick one up for him.  I came in the front door, wearing Duder’s new backpack, dancing.  Oh you should have seen the look of joy on his face, he lit up!  Yes, school is cool but it’s alllllll about the backpack!

I expected to be a blubbering mess today, and I was, but only in small bits and pieces.  We made the decision about a week ago to put Teagan in Pre-K.  It still feels a little surreal because it happened so fast.  I KNOW this is good for him.  We found a great school for him, it has a very green facility, much less toxic environment, they serve organic food, have low teacher / student ratios, it’s just perfect for him.  He wants so badly to have a school, a teacher, and most of all, friends.  He has imaginary versions of all!  For those that don’t know, Teagan has been fairly isolated for the last year+.  He suffered a horrible vaccine reaction that put him in a very dark place.  Our sweet boy was very, very sick for quite a long time.  Now, his immune system is strong, he’s healthy, he’s ready.  I can’t really describe the panic and anxiety I’ve had this week knowing I would be handing him over to someone else two days a week.  Yes, they are wonderful and capable and all of those things, but they haven’t seen what he went through, where he’s been, the hell he overcame.  To look at him now, you’d never know.  I always feel like I need to have my eyes on him to be sure he’s ok.  They know what to watch for, there is a nurse on staff full time, I feel confident in them, but it’s still so hard to let go.

So while I cried this morning, those tears were mixed with anxiety, sadness and much to my surprise, pure joy.  My sweet, healthy boy gets to go to school.  Fully integrated classroom, no services needed, no IEP, no therapies.  This enormous blessing, does not escape me.  Dropping off this morning was hard, but it was also like getting a big huge gift with a giant red bow.  Letting go, while it is such a hard thing to do, is also one of the biggest rewards in parenting.  We are not entitled to it, it is a gift, we know that now.  These moments are the fruit of our labors in healing, we don’t take them for granted.  A year ago, if you would have told me we’d be standing right here, I would have cried at the mere idea of it, but I probably wouldn’t have believed you.

He did just fine at drop off.  He had a few crocodile tears, but I think it was because Jase and I hung around too long.  He bravely wiped his tears, whispered “I need a hug” and hugged me tight around my neck.  As I pulled away from him I told him I love him and that I’d be back in a bit to pick him up.   I told him to have lots of fun with his new teacher and friends.  He smiled and told me loves his backpack.