2.  I am seriously considering doing a weekly challenge on our personal blog.  It would involve simple, easy to accomplish things you can do relating to food, your home, toxins, etc.  Easy fixes that when you add them up over time, they can have a big impact!  If you are interested in joining in, you can follow that blog here and our FB page here.  I hope to start it next week.

3.  On Tuesday I walked out to the van to drop a few library books on the front seat so I wouldn’t forget them later.  When I opened the door the smell of death greeted me.  For real, it was BAD.  After a few gags I dove in and started to search the entire vehicle.  I found it.  Ty had left a bag of raw chicken in the back of the van THREE DAYS prior after a run to the grocery store.  He was supposed to unload everything and forgot it.  OMG y’all….I cannot describe the level of gross, GREEN, fully cooked chicken that was left in the car for three days during a Texas heatwave.  He’s so lucky he wasn’t home because the gagging get it out of the car was out of control.  I had lots of time to calm down before seeing him a few hours later.  I had no idea how I was supposed to get the little kids in the car to go pick Ty up from football practice though.  I warned them ahead of time but as soon as we opened the front door Taryn said “I smeeeeeeellllllllll it”.  Windows down, texas heat, smelling like dead molding chicken.  So we drive up and pick up Ty and the first thing out of his mouth is “Yuck Mom, your van stinks.”  YA THINK CAPTAIN OBVIOUS?!?!

4.  Thankfully, my facebook friend Jennifer came to the rescue, her brother used to detail cars and she suggested ground coffee and apple slices.  It worked.  It took 2 days, but it worked.  Thank goodness!

5.  After the chicken incident, I hit the carwash.  Unfortunately for Teagan, I accidently forgot to roll up his window.  Whoops. 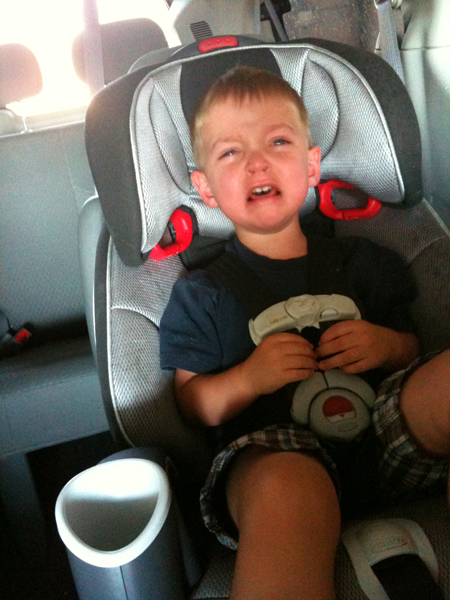 7. Ty’s phone was stolen during football practice.  He can pay to get a new one through insurance or I could give up my iphone upgrade I’ve been holding out for and get him a free one.  No can do buckaroo, he’s paying.  And don’t you know we filed the claim and paid and then someone called from the school saying that the janitor found it on the grounds of the school, tossed away.  She also mentioned that it has been ringing and beeping and that it was bothering her so much she just turned it off.  What?!?!  Yes it was ringing and beeping, we were trying to drive the little thief nuts who took it and locate it with GPS.  If she would have answered it we wouldn’t have paid for a new one.  Now he has two phones.  Oh well, I guess it’s a matter of time before he breaks or looses one and then look at us, we’ll be all prepared!

8.  A few days ago we were touring a possible school for Teagan.  At one point he said “I’m getting big, yo.”  Awesome.  Where does he even come up with this stuff?!?!

9.  A few nights ago the dogs were flipping out and would not stop.  They were both just all out of sorts to the point I asked Jase to check on the kids thinking maybe one of them was sick or something.  Kids were fine, no bad weather, so we let them outside for a minute and they both bolted for the fence.  Jase knew something was up.  Kylie killed a foot long rattlesnake in our back yard.  Heebie Jeebies!!  And my normally snake-a-phobe husband brought the thing in the house and proceeded to bring it in to our bedroom to show me.  A few choice words may have been spoken relating to him totally loosing his mind.  Snakes, dead or alive, in my house, no thank you!  Thankfully Kylie wasn’t hurt.