1.  Back to school around here.  Well, sorta, in a mixed up, per kid, kinda way.  Ty is officially a Sophomore in High School.  He loves his schedule and classes so far!  He’s taking a lot of technical classes this year, computer programming, robotics, etc.

2.  While everyone else is headed back to school, Taryn and Jude are finishing out 2nd grade and kindergarten.  It is a little surreal Jude is supposed to be just starting kinder but he’s almost done.  He is my first kid I won’t send off to public kinder that will be homeschooled from the beginning.  This year has been amazing for him and so far I’m loving our adjusted school schedule.  We will typically go from January to September.  This year we are a little off because we took some time off when Jonah arrived.  But we are set to finish up in October and I cannot wait!  As much as I wanted to follow the public school schedule until Ty graduates, it really worked well for us to work through the summer when it’s so blazing hot.  It’ll be nice to be done and on break when it’s cooler and we can spend more time outside.  Plus that is busy season for me, the break will be awesome.  We already have so much planned for our break, it doesn’t feel like we will have much down time.

3.  Even though we are on an adjusted homeschool year Taryn and Jude are both going to homeschool enrichment classes this year.  PE, art, drama, character building, foreign language and music.  It takes so much off my plate and since Jude gets to go this year, I’ll have one day a week with just Jonah.  Bring on Wednesdays!!

4.  1st day of homeschool enrichment was a huge success. Jude was super nervous. At pick up he jumped in the car and exclaimed “Momma, I didn’t make one friend, I made ALL THE FRIENDS!” Then he talked about his day without coming up for air all the way home. Great first day!

5.  Ty severely dislocated his arm at iFly Austin on Friday.  We were celebrating the last day of summer,  and as soon as he got in the flight tube, his arm popped right out of socket.  Did the adrenaline junkie stop his flight?!  No!  He kept going.  Ugh!  One ER visit and a bunch of x-rays later he was discharged.  He was given a choice of sedation or using hanging weights to get it back in.  He chose the weights and it popped back in before they even let go of the weights and the pain was so much better.  They initially thought there might be a fracture but the orthopedist yesterday said he doesn’t believe there is but there could be a bone chipped that is dislodged in his shoulder.  He goes for an MRI later this week to rule it out.  He’s still in a sling for awhile.  Not the end of summer celebration we were hoping for.

6.  Thanks to Pinterest and my crafty husband, our fireplace is now Jonah proof.  He was obsessed with climbing IN to the fireplace and with the sharp metal edges at the opening, we needed something to block him off.  It’s a piece of wood painted with chalkboard paint.  We attached it with magnets.  I love it.  The only downside is Jonah likes to use his fingernails on it.  ::::heebiejeebies::::

7.  Somehow my baby turned 10 months old this week.  I blinked.  And it happened.  Crazy.  Rounding the corner to his first birthday and I’m going to be a mess. 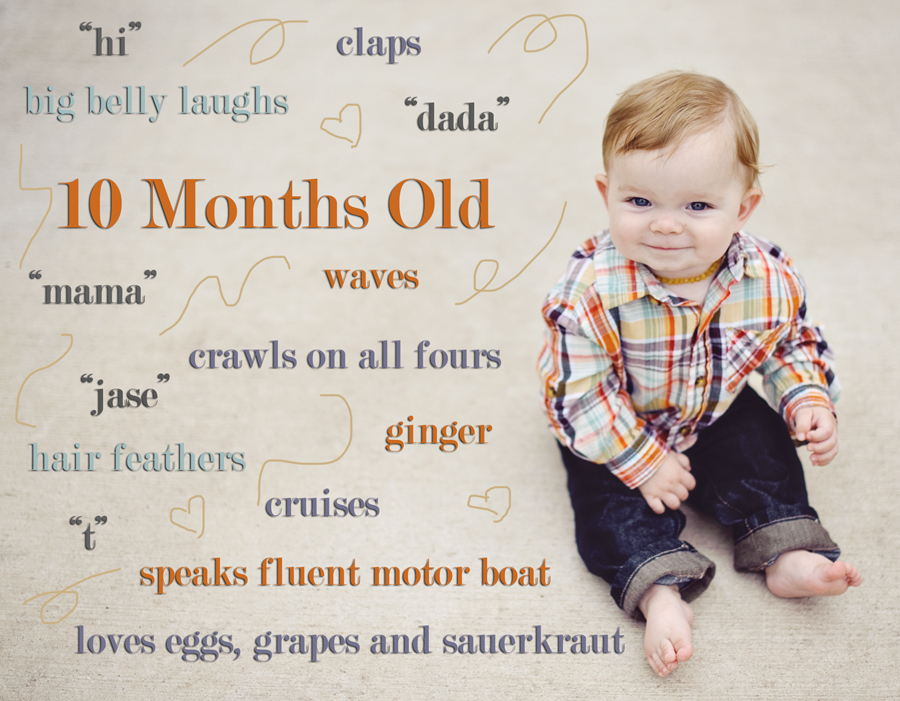 8.  If you are wanting a fall session, book NOW!  I have less than a handful of spots left!!

9.  Last weekend I had the honor of photographing 15 beautiful mommas and nursing babies.  If you missed the sneak peek, you can check it out on Facebook.  I can’t wait to come share more of the images captured that evening along with stories of their nursing journeys.  So beautiful.

10.  Speaking of breastfeeding sessions….I am SO excited that Jonah and I have a session with Mae Burke Photography.  She’s hands down my most favorite breastfeeding photographer *ever*.  She’s doing traveling sessions across Texas, so if you are a nursing momma in Austin, the coastal bend, San Antonio or Dallas, go grab your spot, you won’t regret it!