1.  SO glad friday is here.  This week was totally craptastic.  Truly, it was.  A broken vehicle remedied by trading it in.  A broken dishwasher remedied by a service call amounting to $125 for less than 15 minutes of service time.  One extremely onery 4 year old.  One 12 year old who is struggling in 3 classes and had one week (this week) to pull the grades up just under the wire.  We did it though.  And I do me ‘WE’.  One kid in urgent care for the better part of Sunday.  Same kid took a fall yesterday at the dino park and landed in the ER with a severed/sliced tongue (ouch!) and a big fat lip. 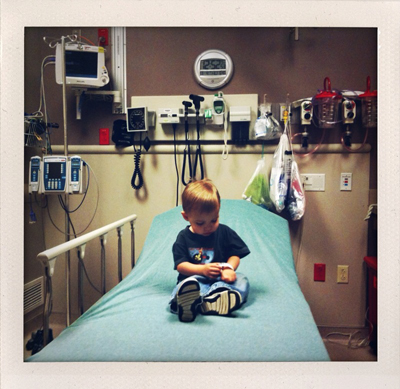 They decided it should heal on its own rather than put him under to put it back together.  We were happy to hear that, due to his tracheomalacia it’s always a risk to put him under anesthesia.  Duder was just pretty ticked off at the world yesterday.  Tired, in pain, bleeding, hungry.  They said it will bleed for a few days and heal in a few weeks.  Yesterday afternoon he sat on the couch and yelled at his binky for a good 10 minutes since he couldn’t use it.  He also opted to whack Ty in the head instead of the usual hug the moment he saw him.  It was difficult to eat, talk, just everything.  He’s doing better today, thankfully, yesterday was rough stuff.  He’s on some kick butt antibiotics to fend off infection.  Especially because his first instinct was to put his hand (covered in sand) in his mouth when he hurt it.  I had water with me and rinsed his mouth out right away, but we still need to watch him closely this week.  And thank you Libby for helping us get out of there and to the ER so quickly, I really appreciate it!

2.  All of those things combined we easily spent in excess of $25K this week (counting our new slackerwagon).  Uggggghhhh, talk about an expensive week!

3.  I absolutely LOVE this take on big families…..so true, so funny!

4.  I’ve been meaning to come share this for awhile.  New packaging for my birth clients including a custom image box filled with their sample prints and a custom disk case, both designed by the fabulous Tina Parker.  Forgive the cruddy photo, I’m not a product photographer, they are gorgeous in person! 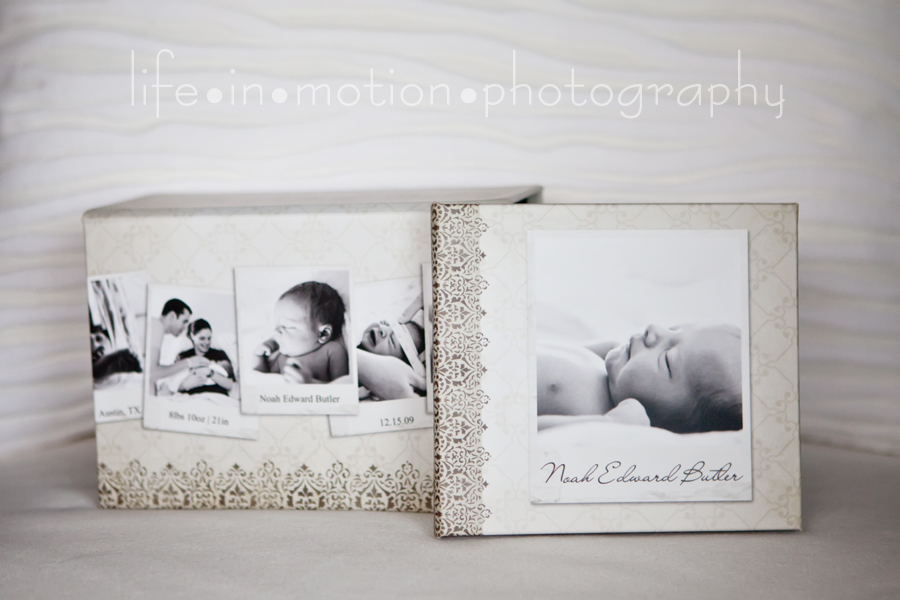 Now I’m off to work on a few blog posts for this weekend, I need to pack up all my stuff for my newborn session in the morning, yet another round of Words With Friends and then SLEEP, glorious, SLEEP!

home from the ER, once again.

This has been a horrible, horrible week for our family.  Earlier this week Teagan was rushed to the ER for breathing issues (full story in my post below).  We’ve been struggling to keep Taryn well enough to have surgery next week.  It was just supposed to be to have her tonsils and adenoids removed but through the entire nightmare that is surgery pre-op workups, blood work, audiology exams, cultures, etc., we found out the surgery will be more extensive that we initially hoped.  Her ENT said this is one of the worst cases she’s seen in a very long time, her adenoids are so huge they are all but blocking off the area behind her nose.  Her tonsils are almost touching each other and she’s having trouble with sleep apnea.  She will also need to have tubes put in her ears due to a problem with her eardrums, which totally took us by surprise because she’s only had one ear infection her entire life.  She also has a sinus condition that has resulted in infectious pneumonia in her sinus cavities.  I didn’t even know such a thing could happen.  We literally had something going on every day this week, a dr. appt for one of the kids, blood work, cultures, pre-op appts.  At one of those appointments we found out that one of Teagan’s tubes is dislodged in his ear and he’ll need to have another out patient surgery very soon to get it fixed again.  Annnnnnnd, I found out I have a double eye infection….great.  I’ve just had all of these thoughts of what am I doing wrong?  Where am I failing as a mother that I cannot keep my children well?

Then, today I was watching my friends daughter because her son needed to go to the hospital for a few tests.  After a few errands I decided to pick up lunch and take the kids to the park to play.  While there Taryn fell off the playground equipment and was seriously hurt.  She broke two bones in her right arm but it’s pretty bad.  Especially for only falling about 2.5 feet to the ground.  We thought after the ambulance arrived that she may have hurt her head or neck as well (she was turning blue).  I didn’t see her fall, my back was turned chasing teagan about 20 feet away.  It turns out her little body was just in shock out of pain and fear.  She was afraid the firemen were going to take her away from me when she heard the sirens coming 🙁  We were transferred by ambulance to Children’s Dell and after a very long day of doctors, scan’s, ortho’s putting bones back together, heavy sedation, etc., we just made it home.  We’re just thanking God she wasn’t more seriously injured and that the orthopedic surgeon was able to do his work from the outside of her body.  Amazing what he did for our daughter tonight, we were in shock at the way he manipulated her body and put it back together again.  When he started her forearm was a semi-circle with breaks right in the middle of the bones.  By the time he was done, looking at the after x-rays, you’d never know what it looked like just a few hours before.

One of the scariest days of my life.  She’s ok, but in a lot of pain and will be in a cast from her palm to halfway up between her elbow and shoulder for a minimum of 4 weeks.  The hard part is that for the next 72 hours, she has to keep her entire arm up above her heart to avoid swelling at the break points in the bones.  No easy task for a 4 year old.  In fact she’s sleeping with her arm in a large blue swiss cheese looking foam thing to keep her arm and fingers pointed toward the ceiling.  I don’t know what we are going to do about her surgery, we may consider moving it because it just seems too unfair to subject her to so much pain in just 4 days time.

And a huge thank you to our dear friends, Alli and Mike, who take our children on a moments notice (literally, way to get there quick Mike!), love our kids as your own and support us with your friendship.  I don’t know what we would do without you guys.

This, very tired, momma is off to bed….

3. We fought so hard to add this sweet soul to ou

Gulf Shores, Alabama! We are heading your way!!!!

This crew is back and ready!  New job means the f

We decided to head up to Dinosaur Valley State Par

I've known Sara online for a really long time and

Yesterday Joan described Jane as a total snuggle b

This guy is officially employed!  He received and