Each year our family follows a 4 gift rule of want, wear, need, read at Christmas. This year the kids received an experience/adventure for their need gift since the vast majority of our needs were covered during the great purge and preparing to go fulltime. Jonah’s experience gift was up first, we took everyone sledding. We were hoping for snowfall at our campground but Mother Nature didn’t provide. So, off to the Gaylord to go snow tubing we went. And the kids + Jason had a BLAST. Z and I were spectators on the sideline. They spent hours going down 4 different slides and loved every minute of it. 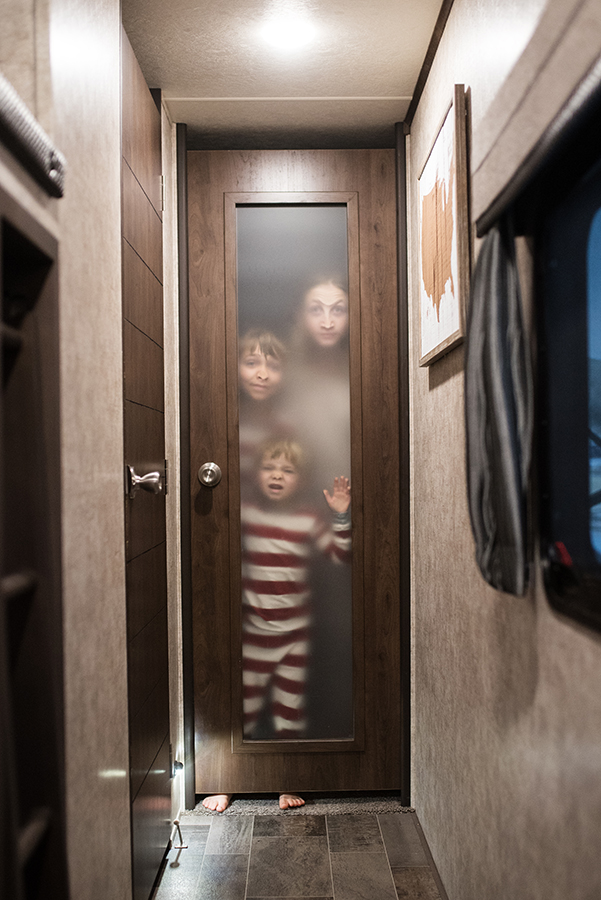 I can’t stop laughing at this. 😂 The kids waiting for the ok to run out and see their gifts this morning. I’m not a huge fan of the frosted glass doors in our RV because I’m afraid the kids will break them. I take it back…I take it allllll back. I love the doors, this photo alone is worth it!! 😂😂😂 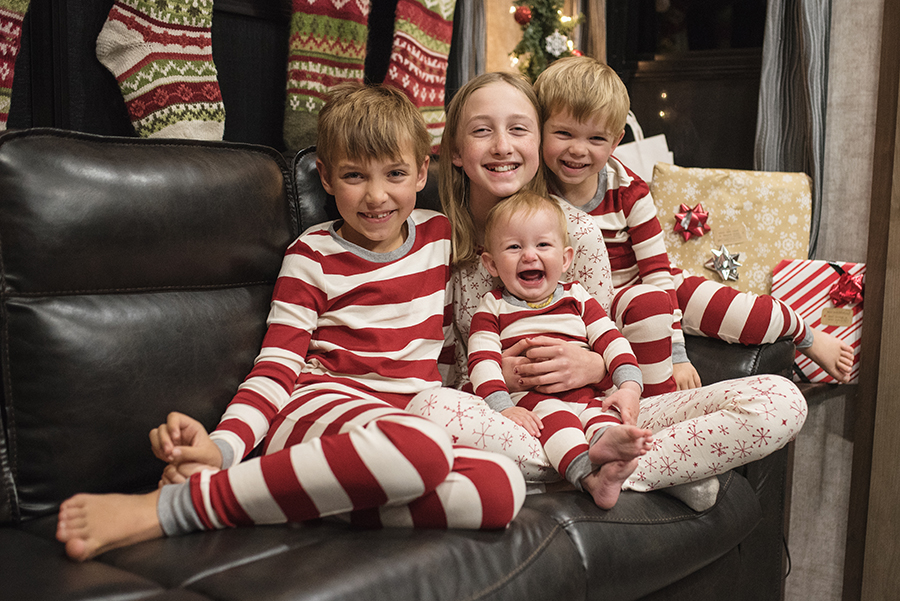 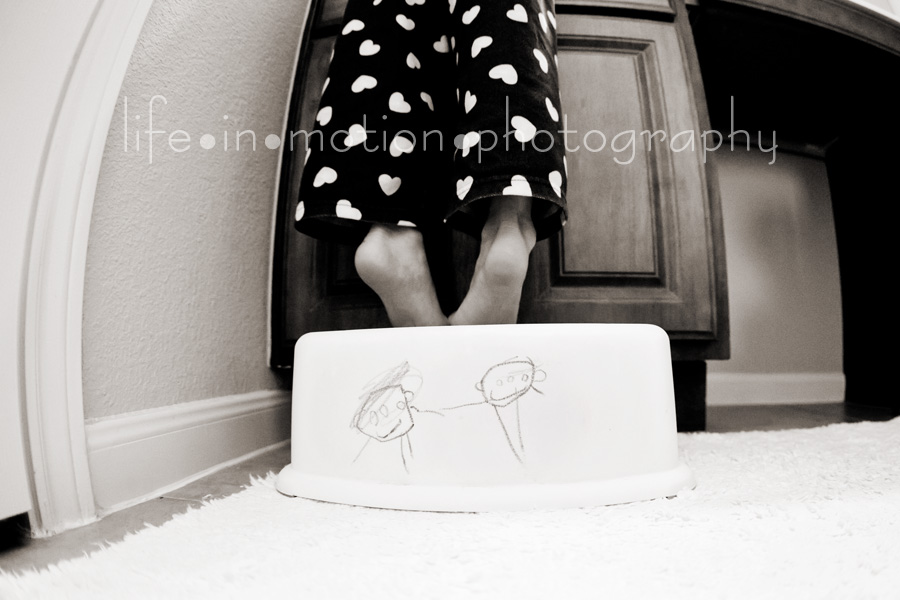 I’m not sure which one has the bedhead, it could really go either way.  The third eye in the middle is actually the nose in case you were wondering.  Magic Erasers are my friend.

2.  Ty was pretty excited a few weeks ago to go to his first UT football game.  And by excited, I meen e.x.c.i.t.e.d!  I bought him a little disposable camera to put in his pocket.  I can only imagine what is on it….when I asked he said he took photos of his food, the 54 oz drink his dad bought him (why?!?) and the jumbotron LOL!  Anyway, I’ve been carrying around that little orange camera in my purse for a few weeks and one day Taryn was sitting next to me while I was writing out some checks and said “what is that?”  I told her what it was and that I needed to “bring it in and get the photos developed” she asked me if they were going to “come sit on our couch and proof them”…..hehehe……funny kid, I’ve ruined them!

3.  The kids wrote letters to Santa the other night.  For the first year, Taryn wrote hers by herself.  She was proud. 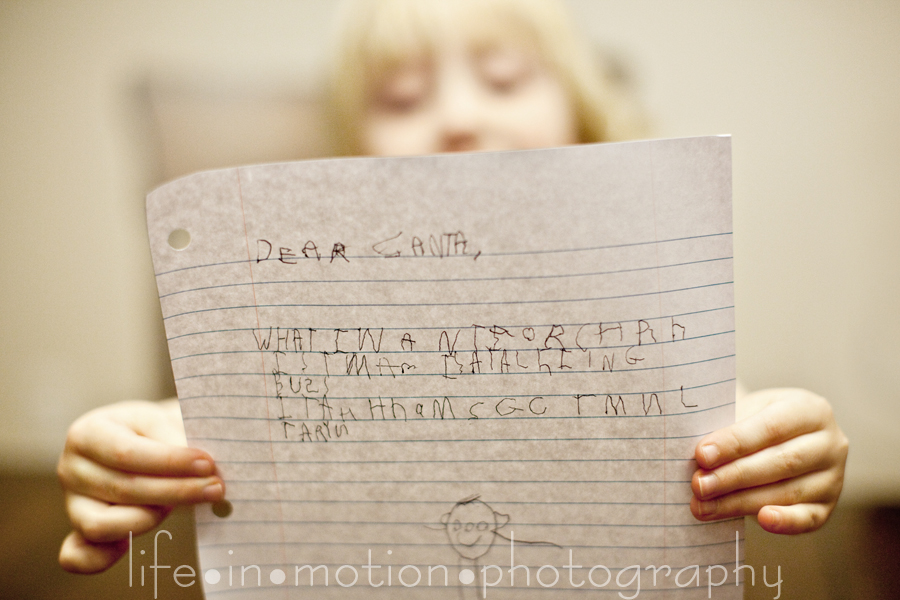 It says “Dear Santa, What I Want For Christmas Is A Talking Buzz…something something something (it’s mean to say with a moving helmet), Taryn.   And then a picture of herself so he’ll know who she is.  No please or thank you…but I’m proud of her.  Big girl.

While I don’t think he full understand the concept of Santa, he did understand we were writing about things we want because he kept saying “more binkies…uhhhhmmmmmm, elmo….uhhhmmmmmmm, buzz!” and tapping his paper.  Yeah, that pretty much sums up his list!

5.  Jason got a call from one of the network directors at this office over the weekend because they were doing some maintence on their system.  Apparently they needed his password to do something to his machine.  We were in tears laughing because he had to spell out his password to the director…..t-u-r-d-(“yes sir, d as in dog”)-m-o-n-k-e-y….bwahahahaha!  That’ll teach him!  ((no worries, he has since changed it!)) Classic.

6.  Teagan’s new favorite phrase of the week is “HEY NOW!”

7.  Saturday morning we loaded up and took the kids out to eat breakfast.  A rare treat for us as 1) I’m usually working on weekend mornings and 2) we live so far out by the time we get everyone out of the house and to a restaurant, everyone is cranky and starving.  But we braved it and I’m so glad we did.  It was nice.  After breakfast we did a little shopping and then went to the Christmas tree farm in Salado to get a Christmas tree.  The kids had a great time.  Ty was all about the hot chocolate and picking the perfect tree (he found it too!).   Taryn was all about the tree swing and the hay ride.  Teagan was all about running from us and hiding in the trees.  And the popcorn. I don’t even think he noticed we were ON a hayride as he shoved popcorn in his mouth. 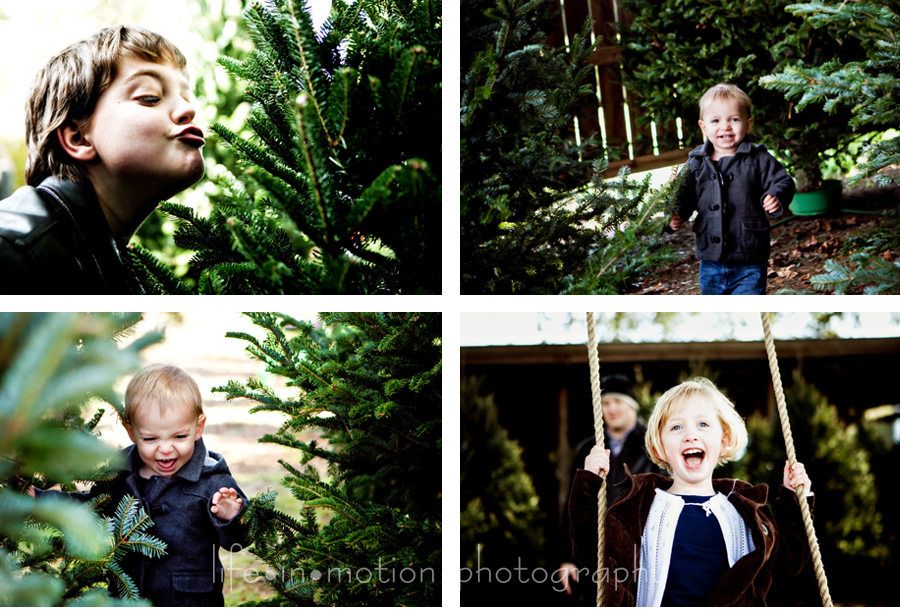 Taryn looks good.  Doesn’t she look good?  I was looking at some photos I never posted from August, when things were really bad before her surgery and she was so thin.  We haven’t seen her look this healthy in a long, long time.  Healthy rocks.

8.  Well, it’s official.  We know where this weirdness came from. 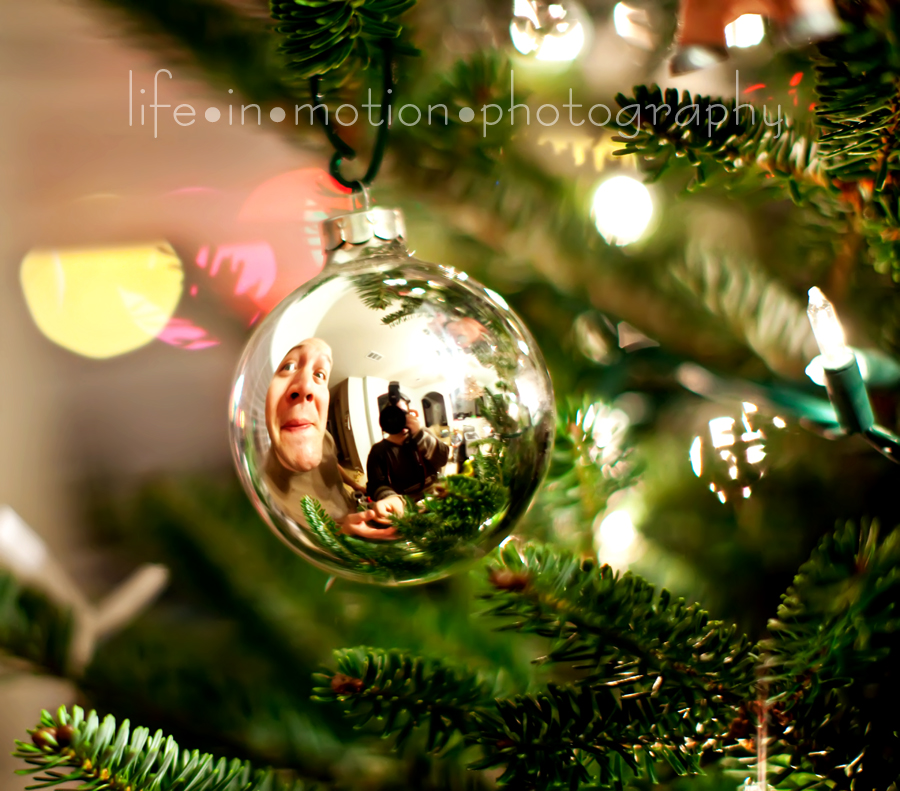 9.  After our tree was decorated I wanted a photo of the kids, all snuggled up, looking sweet in their pj’s in front of it.  Instead I got this: 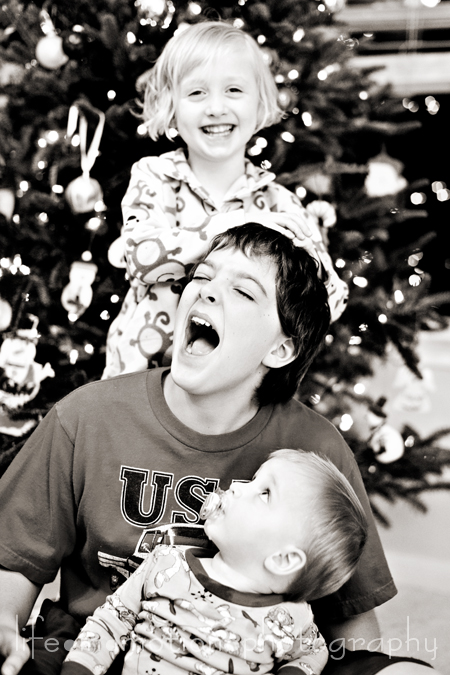 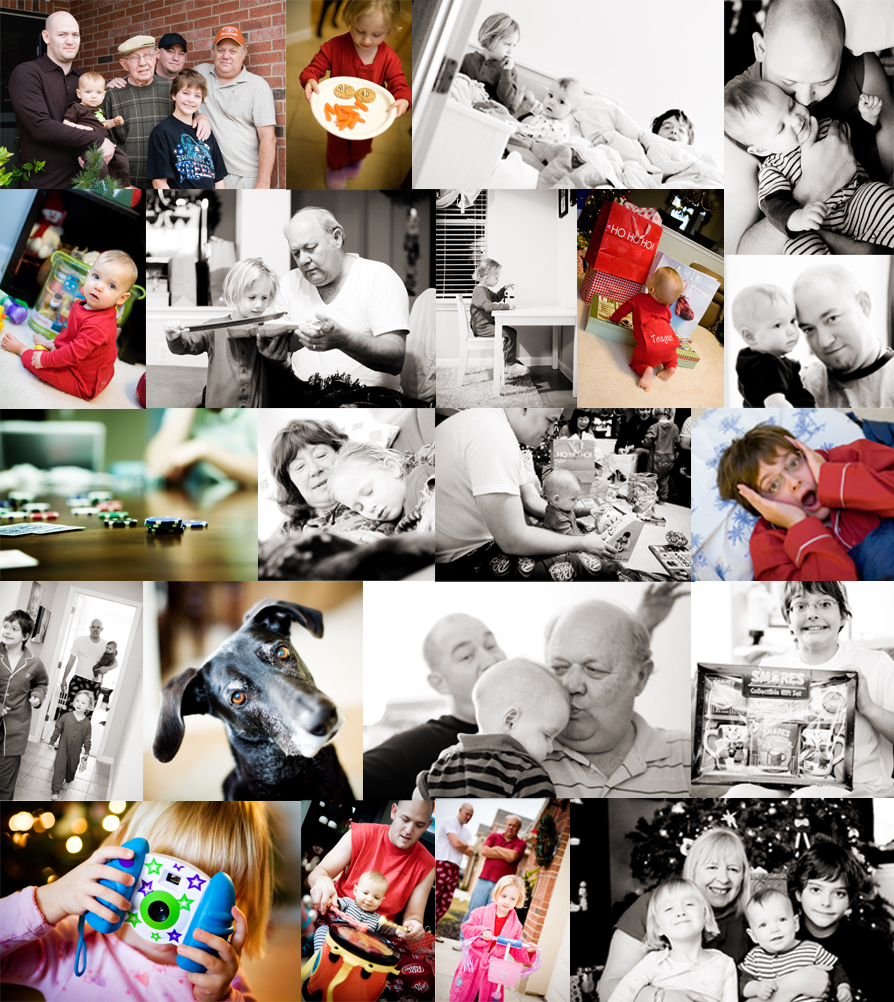 knowing that buying less gifts this year didn’t change us or the meaning of christmas . the excitement in the air as the grandparents arrived . watching the wonder in teagan’s eyes with each new experience . he was just as happy with the bow on the box as he was with the gift in the box . christmas jammies with names on the hiney . pretty red monogrammed dresses . the kids love uncle scott more than santa . watch t run out to see her violin and hearing “that’s not pink” . i knew we should have bought that can of pink spray paint . do you know how hard it is to find a pink violin? . cookie and cocoa for santa with the snowmen as guards . playing cards and beating my father-in-law . sporting an evil evil laugh as i scooped up all my poker chips . bwahahahaha . the annual lottery scratch off dual . watching jason’s grandpa love on kylie the dog, just like he always does when he visits . cutting up apples with jason’s grandma, chatting and catching up . snuggle bugs in the bed with gee gee every morning . watching teagan reach out for my mom after she got off the plane . teagan waving to each and every person going “bye bye” at the airport, his arm was so tired lol . watching my husband ride ty’s bike, take the ramp and bust his butt in the front yard . while wearing dr. pepper pants . no kidding

I’m a little late posting this, but I found this cute little christmas tree shirt on etsy before Christmas.  (I got it from this seller)….I love it and so does he, he’s constantly fiddling with the tree =)  It came with an adorable green hat too but I couldn’t get him to leave it on for pics.  I’m sure you’ll be seeing it in photos at some point, if not on my little guy, a client session for sure!  Laura was great to work with and she’s doing a cute little custom order shirt for Teagan to wear to his birthday party too…can’t wait to see it! 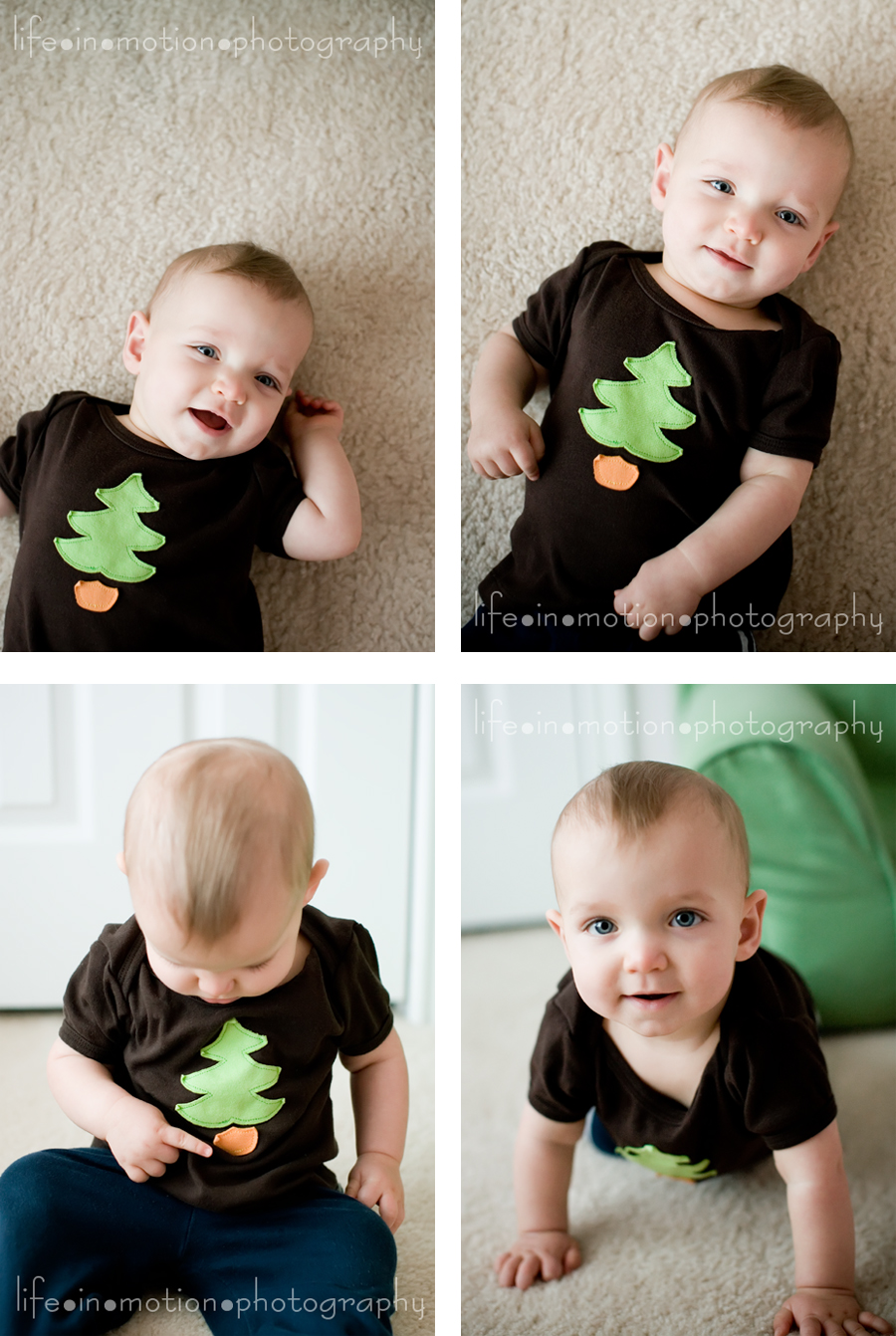