1.  I have come to the realization that I’m never going to catch up.  If it didn’t happen in January, it’s probably not going to.  I have sessions that are 2 months old that I haven’t blogged yet, not to mention a few births and a stack of personal photos.  I haven’t been taking very many photos at home though this month….thankfully the iphone is never far away….

2.  This week was the first time since Teagan was around 6 weeks old that I cried before getting out of bed at the mere thought of my husband leaving me alone with the children for the day.  It was rough.  The worst week we’ve had in awhile.  There are days Taryn overwhelms me so much that I feel as though I can’t breathe.  I know before I had her, I would have thought horrible things about a mother who would say that out loud.  But that was before I had a blond diva who is demanding to an extreme.  This week she was in full force and teaching Teagan all her tricks.  Early in the week she pushed Teagan down and sat on him, he got mad, screamed and cried and climbed up on my lap.  He then threw up all over me and him.  I asked Taryn to go get me a towel because if I would have stood up, it would have been bad.  She moseys to the bathroom and comes back with one tissue.  No honey, a towel, get Mommy a towel please.  2 minutes later she comes back with a washcloth….getting closer and about to gag from the smell I get specific, a bath towel Taryn, get Mommy a bath towel!  Zero sense of urgency she saunters back to the bathroom, comes back a few minutes later, no towel in hand, walks right up to me and says “Mommy, can I have a gum ball?”  Uhm, NO!  I’m covered in puke, go.get.me.a.towel!  Oh yeah…….Add in a few sickies and exhaustion and Friday (and the return of mother’s day out) couldn’t get here fast enough.

3.  Ty brought me flowers and candy home from school today.  He’s so thoughtful.

4.  Taryn now plays dress up in her room when she is supposed to be napping, whatever she appears in once she declares sleep time is over, is always a crack up.

6.  Michele sent me some photos from our little adventure out with our hubbies and I LOVE them.  I will come share them soon.  I love having photos of just me and Jase, not centered around the kids, something just for us.  It’s so rare and I cherish them already.  I’m still working on hers….here is one…I love how you can just barely make out the capital building behind them…. 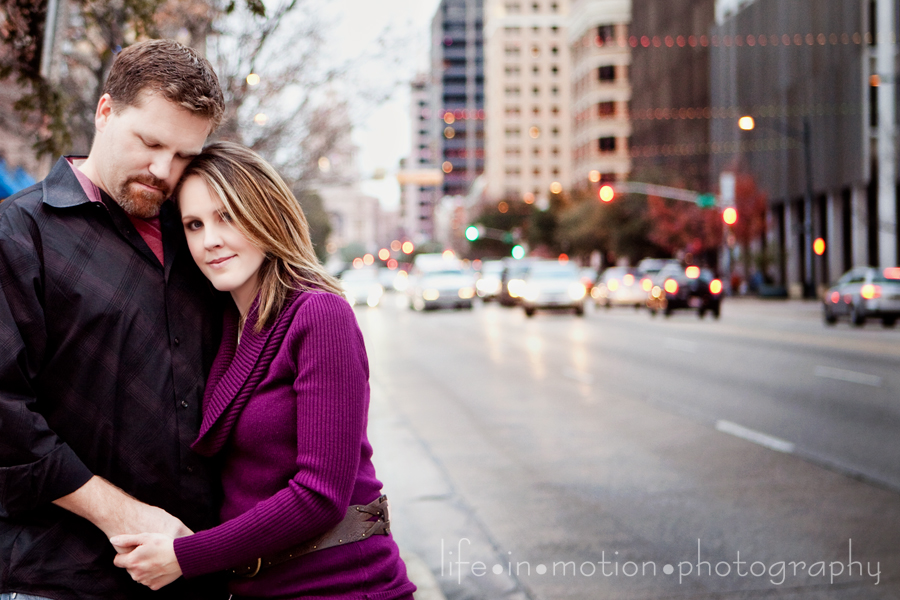 7.  Teagan got a little motorized 4 wheeler ride-on thing for his birthday.  He LOVES it.  We decided to give it to him on his actual birthday in an effort to avert the drama it would cause with his sister.  Turns out that was a good plan.  Although I will say, she is pretty resourceful.  She now brings him every single toy of hers that Teagan has ever wanted to touch or play with in an effort to woo his new ‘motorcycle’ away from him.  Sometimes it works.  What she doesn’t know is that he runs to her room and touches it all the minute she leaves for school anyway…..shhhhhhh, don’t tell!

8.  As a result of the ‘motorcycle’ battle between toddlers, when we were checking out of Target yesterday we had a few birthday items and the cashier asked whose birthday it was.  I told her Teagan just turned 2 and she wished him a happy birthday.  He responded with a prompt and loud “ITS MINE!”.  Awesome.

10.  Tomorrow is Teagan’s birthday party!  Can’t wait for the Stradtner grandparents to roll in.

1.  This post has been open on my desktop for 2 days.  I had honest, good intentions of posting on an actual Tuesday….see title above.  Whoops.

3.  Orange!  Taryn’s new favorite color.  Talk about suspense overkill.  I had a cute way of announcing it but well, that was months ago and with my schedule being what it is, cute announcements just aren’t in the cards right now.  So, it’s orange.  There it is.  Figured I better come out with it before it changes again.

4.  My FedEx guy this year hates me already.  I can’t decide whether to tell him to “suck it up dude, it’s gonna get worse before it gets better” or bribe him with cookies.  Maybe both?

5.  All the comments to the photo of Jase and I….wow, thank you!  If you know me in real life, you know I don’t look like that.  Katie’s magic makeup and Sara’s magic camera.  Heck, you may have never even seen me where my hair down depending on how long we’ve known each other.  I wear it back because the kids pull it, and because it’s whispy and blows in front of my camera all.the.time.  Hate that.  Anyway…..the comments made me blush.  Thank you.

7.  The other day I was working on my laptop, trying to drown out the sound of crazy kids and focus.  Then it was quiet for a few minutes and I hear Taryn talking to Teagan…”….come on Teagan….I’m bored….let’s go watch the dog poop….” ((I’m just keeping it real here people))….I hear Taryn open the back door and let the dog out, then a few minutes later I hear them both clapping and yelling “yay!!  good girl!!” with their noses pressed to the back window.  Poor Kylie, she gets no privacy whatsoever.  I wasn’t quite sure what to make of this event, so I just laughed, shook my head and went back to work 😉

8.  Speaking of keeping it real.  Alli spotted this at my house the other day and told me if I was ‘realllllly’ keeping it real around here, I had to blog this.  So, here it is: 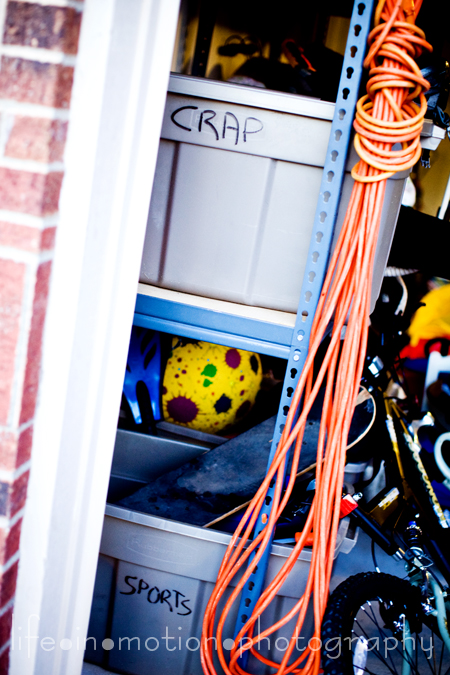 Yes, you know you have too much crap in your garage when it is actually labeled as such.

9.  We had a party Monday night.  Small, but fun.  My mom sent us a big box of Saints stuff complete with jerseys, pom-pom’s, Saints food, all kinds of good stuff.  Monday night football against their rival the Falcons, total cause for a party.  We invited our neighbors across the street who are also from Louisiana.  Big step for us.  Sounds silly but last year when our neighbors right next door moved in, we waited until they got settled in and then gathered everyone up and went over to welcome them to the neighborhood.  We had high hopes for great neighbors and were so thankful a family moved in.  We were beyond bummed that the dad greeted us with uhmmmm, how shall I say it nicely, rudeness.  And not just one comment, a bunch, we were so taken aback, it was bad.  We came home shocked and so disappointed, just disbelief.  Still to this day I wish things were different, that we could all be friendly, our children could play together….but that just isn’t the case and it makes us sad.  Ever since that afternoon we’ve been a bit nervous and cautious about meeting new neighbors.  Houses are popping up constantly as they are still building around us.  I’m so glad we reached out to the sweet couple across the street this week, so nice and just really lovely, kind people.  And oh yeah, THE SAINTS WON!!!  7-0!

10.  I didn’t forget, the story of how Taryn got stuck in the elevator….

Taryn, Teagan and I went to the ortho office to have T’s cast removed (finally – woot!) on Monday.  That morning I was chatting with my mom and told her Taryn was wearing her new jersey that she insisted on pairing with her new black boots she wore for pictures last weekend.  My mom asked for an iphone pic and I told her I’d send her one later after Taryn got her cast off so she could see her without a cast too.  So, we go to the appointment, the cast comes off, arm is x-ray’d, arm still bent, will go back in 6 months but it should correct itself during that time.  We’re released and head out.  We get to the elevator, push the button….we wait….and wait…..and wait.  It’s a very busy building right next to Children’s Dell.  So I pull out my iphone and ask T if I can take a pic of her to send to Gee….

You can see in the pic that as I’m taking the photo, the elevator door to her left finally opens.  I throw my phone in my pocket without even looking at the pic, look down to grab the handles of Teagan’s stroller and by the time I look up, I realize Taryn darted into the elevator and the door was already closing.  I lunged forward to catch it but it was too late.  Homegirl was stuck.  It was totally silent for about 4 seconds.  4 long seconds, I stood there in shock, and then she FREAKED.  I can’t even describe the level of the freak out.  I just start yelling into the crack in the door…..”calm down, I’m right here Taryn…..listen to me….stop screaming”  And then it hit me that someone on another floor might push a button before we did.  Without thinking I told her to PUSH THE 3 BUTTON TARYN!  PUSH THE NUMBER 3!!  YOU CAN DO IT, PUUUUUUSH 3!!  And amoung the screaming I hear “uuuuuhhhhhooooookkkkkkkk”!  Yes, the people walking past were staring at me like I was crazy and had lost my mind screaming into the elevator door.  I was oblivious.  She did it though, she pushed #3, the door opened and the freakout continued as she clung to me for dear life.  I was so proud of her for making the door open and listening to me through her panic.  That’s when it hit me that I could have just reached over and pushed either the up or down button myself….but whatever….(yes Jase laughed at me for this)….I was dealing the best way I could in the moment….but we figured it out.

You should have seen me try to get her back on that thing.  NOT a fan of the elevator anymore.  I’m just thanking God that no one on another floor pushed the button to call that elevator….can you imagine that?!  I would have had to figure out if she went up or down (I’m assuming I could following the screaming if that thing would have actually MOVED) and then get Teagan out of the stroller and make a run for it.  And that poor soul on the receiving end would have gotten much more than they bargained for when the door opened!!  It wasn’t so funny in that exact moment, but by the time we made it to the parking garage elevator and I was trying to coerce her onto yet another elevator….I thought it was hysterical and was laughing (by myself).