not afraid of the sun | austin photographer

so this past weekend, MC accompanied me on the call for models shoot in downtown austin.  for those that don’t know, MC is a local that i mentor.  the term mentor is used loosely because i really stink at teaching….but we have fun together and she’s making great progress despite my horrid teaching skills.  we hadn’t been out shooting together for a few months due to busy season, holidays, etc. so when she asked if she could go on the model shoot, i was thrilled.  i was even more thrilled when we were walking downtown and she asked if we could stop for a minute and shoot in full sun….yeah buddy….that’s my girl!!!  i was so proud.  so we talked for a minute about how to set up the shot, angle, shadows, all that good stuff.  i was going through some of the proofs tonight and thought i’d come share.  the shot on the right is a pulled back, sooc shot (sharpened, saved for web).  you can see how the light is hitting her dead on, the shadow that results to camera right.  the light is harsh yet pretty flat and uninteresting.  but by turning our model just a bit and positioning myself below her (i was in front of her to camera left, laying on my side, flat on the ground) for this shot, it eliminated the shadows by placing them behind her and adds interest.  the light from this angle had a much nicer, less flat, glow to it too.

so many times as photographers we dive in to the nice safe shade, but there is all kinds of fun to be had in the sun too!!  in the above shots i made sure i eliminated the shadows so the focus was on the beautiful model and the dramatic wall behind her.  i like doing the exact opposite sometimes too….shadows can be really effective and fun to play with….the first shot that comes to mind is this one from Cristina & Whit’s urban session…. 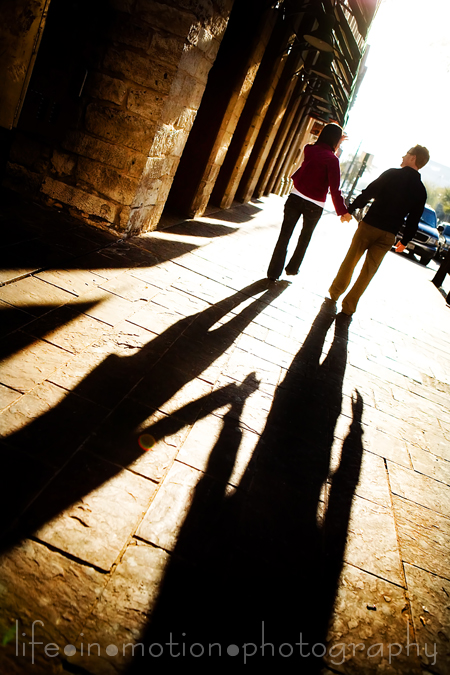 i’m always hesitant to post stuff like this cause i’m not sure if it interests anyone, but I hope it encourages at least one person to get out of that safe little patch of shade and dive into the sun!  that’s the beauty of digital, it doesn’t cost you a thing to practice!

oh yeah, after this shoot was over, MC and I went over to BLU.  One of my clients opened up this cafe, coffee shop, lounge in downtown Austin, if you’re local you’ve got to check it out…..soooo cool.  i won’t mention how fast we scarfed down our latte’s and chocolate croissants.  croissants?  what croissants???