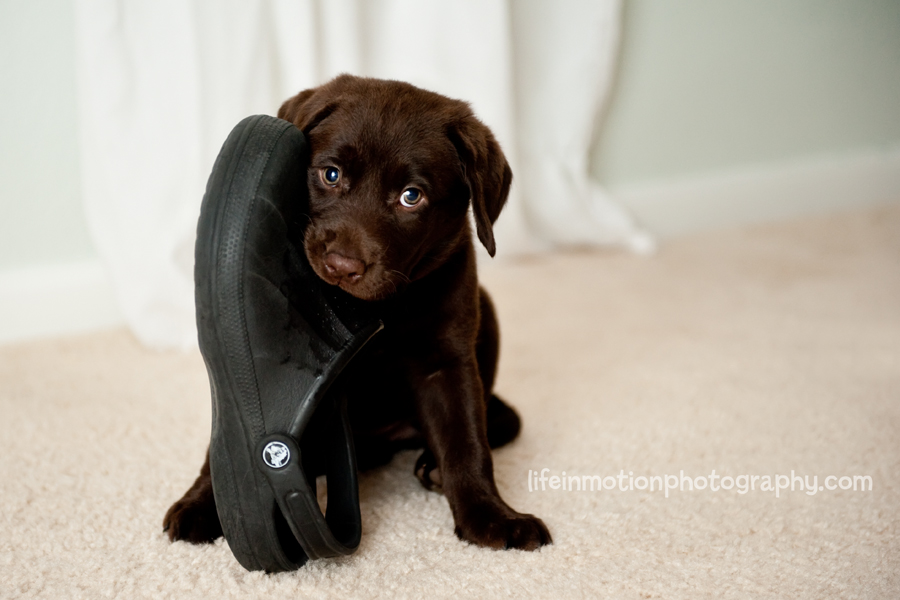 Oh my word does this dog chew on every.stinkin.thing!  She’s a chewing machine.  We have chew toys for her but she is mischief through and through.  She’s a blast though too.  I was thinking of all the things she’s gotten in to just since Saturday and I’m pretty sure it would be easier to list the things she hasn’t chewed on….sigh.  Right now her favorites are Jason’s robe in the morning.  It totally cracks me up to see him all groggy meandering through the house with the puppy attached to the bottom of his rob in full on playful attack mode.  He just keeps meandering and she just keeps flopping her little head and ears from side to side, hilarious.  She loves dragging Kylies bed all over the house too.  It is around 20x her size but she doesn’t really care, our girl likes the challenge.  And poor Kylie could care less, she still finds it to sleep when she needs it.  I swear she’s rolling her eyes at puppy antics too.  Maggie also loves our outside broom that sits on the back porch.  She carts it all over the place and we’ve even had to stop her from bringing it inside several times today….

Hmmm, what else has she chewed?  The carpet, the outside doormats, the living room curtains, she darted out of Ty’s room yesterday with a bottle of his cologne that had been on his nightstand, a book, a magazine, Teagan’s blankie, one slipper, 4 shoes, one kids seat cushion, a Mr. Potato Head arm, my back porch rocking chair legs, the baby proof contraption on the entertainment center, a tag reader pen, the rug in the playroom, and the funniest yet, I spotted her running through the house with a binkie in her mouth.  I grabbed it quick before Teagan saw her and lost his cool.  Those are off limits Maggie Mae!  Yes, lots of positive correction and the constant offering of chew toys at our house!!  She really is doing so well though.  In fact, yesterday she went and sat by the back door to let us know that she needed to go out to potty.  After only a couple of days!  She’s so super smart.  She sleeps through the night as well and hasn’t had an accident in her crate so far.  As long as week keep her entertained and tired, we’re good.  That’s the great part about 5 people in the house, there is always someone to play with and pester!  Teagan and I put her on the leash yesterday and of course her main goal was to chew it up.  It took a good 5 minutes to get her down the driveway, she was not having it.  But once we go to the sidewalk I put Teagan out in front of us and off we went, happy as can be, walking right along.  Of course there was a lot of stopping to sniff every little thing, but I was really surprised she did so well.  I’m training her to walk only on my right side because for some reason Kylie switches sides constantly and it drives me bonkers.  I’ve learned that a walk down to the bridge and back earns a nice long puppy nap so we do that often!  HA!  Teagan loves it to and it has been good for all of us.  Coming soon:  photos of Taryn with Maggie Mae!