Today we celebrated his 31st birthday.  I met him when he was 24.  We were next door neighbors.  I still remember the first moment I saw him, I was standing in my living room and he walked out his front door towards his truck.  I just stood there, and watched him.  I’m not sure why, but I just remember taking the scene in.  A few weeks later I introduced myself.  A few weeks after that we became friends.  Quite a few months after that we fell in love.  A few years later, engaged, 18 months later, married.  10 months later, Taryn, our honeymoon baby came along.  He’s the best men I’ve ever known.  Kind, smart, and funnier than anyone would ever guess just by meeting him in passing.  He’s a really good dancer, although he doesn’t bust a move nearly as often as he used to.  He can drive me crazy one second and then the second second make me laugh.  He’s an amazing dad, he’s the patient one, but he’ll tell you he’s not (he is).  He loves his Taryn’s dog, a lot.  When something truly amuses him, he lights up from the inside out.  Watching him with the kids makes me swell up inside.

T and I planned his party, she picked out the decorations and the cake and I picked out the balloons.  She helped decorate the house during what was supposed to be nap time, which was a BIG deal.  We all went out to dinner, Jase chose the place, the kids were good and the chocolate cake when we got home, was yumm-o.  Teagan was ready to dive in….given the chance, he woulda…. 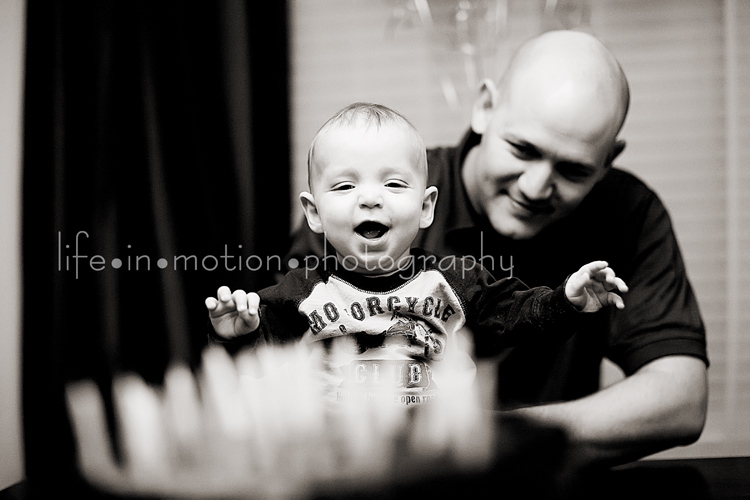 Man there are a lot of candles on that cake!  It kinda bugs me that he’s younger than I am…probably cause he brings it up A LOT.

Today also marks one year that we’ve been in Austin.  One year since we bought our house.  In some ways it’s flown by, and in others it feels like we’ve always been here.  So much has happened in the last year, we bought our house, made new friends in austin, good friends, the kind you keep, and cherish.  We had a baby, our last baby, a funny, chill, little dude that brings so much joy into our home.  Ty went from being a boy to stuck somewhere between boyhood and a teen.  Taryn got big, lost that baby look somewhere, started school.  His dad faced cancer, we opened our business, Jase got a promotion, we have grown and changed and loved, as a family.  Yeah, that year flew by.  Betting the next one will too.