1.  It’s not Tuesday, but I’m happy to be blogging.  I’m working a ton of hours right now, busy season is in full force!!  I’m trying so hard this year to blog all my wonderful clients.  Last year a bunch never got blogged.  I’m trying to do better this year 🙂

2.  Taryn went back to school for the first time since August on Monday.  She did amazingly well, we are so proud of her.  Their class Halloween party was held yesterday.  There are 13 kids in her class and only 4 girls including her.  The costume party produced 3 princesses and one buzz lightyear in the girl corner.  She makes me smile and I love that she is who she is.  That’s my girl!! 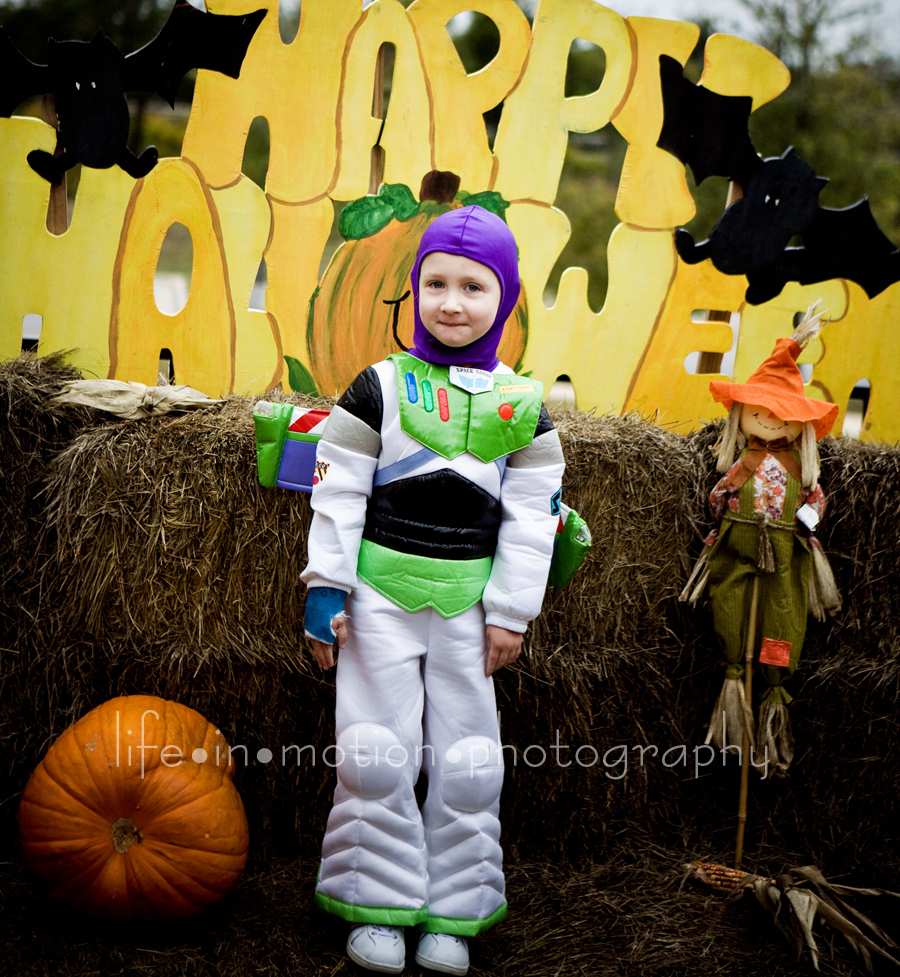 The class photos and the parade photos are a riot but I can’t share them since other people children appear and I don’t have their permission to post.

3.  This crazy monkey was there too….I was a bit concerned he’d be all up in everything.  He was.  He’s a mess, but a fabulous mess. 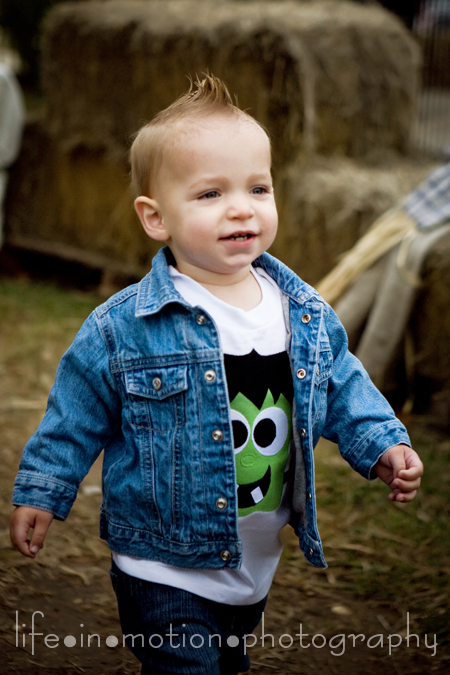 I think he forgot that he wasn’t wearing his karate costume a few times.  He may or may not have karate chopped an innocent princess and a pirate.

4.  After the parade and photos of the kids at the pumpkin patch, we left Taryn to enjoy the party with the rest of the class.  Teagan and I headed out to enjoy some retail therapy at Target.  Little dude partied too hard that morning and after battling bobble head for a good 10 minutes, fell asleep face down in the cart.  iphone pic…. 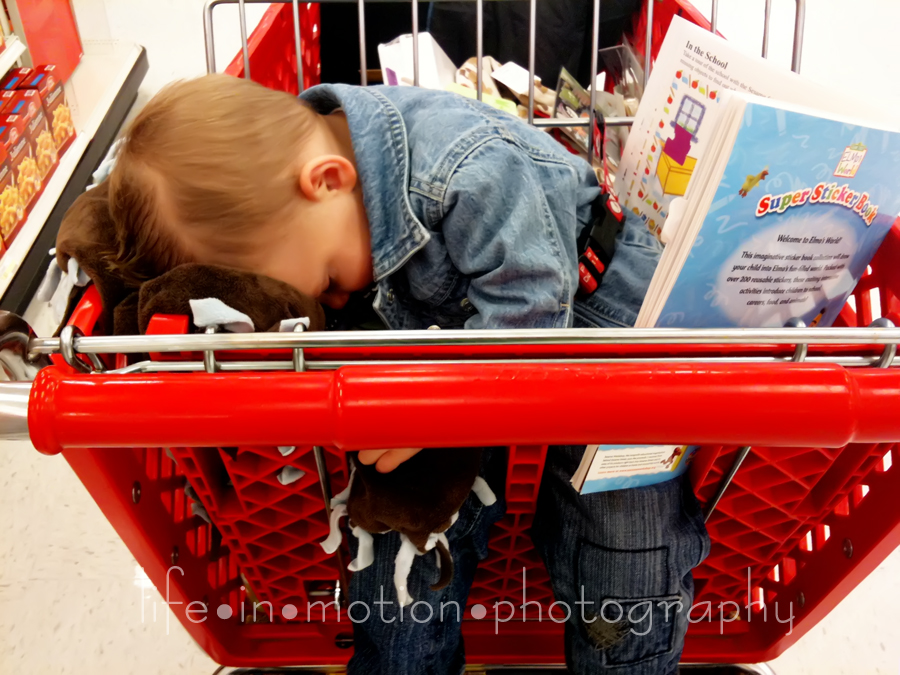 I decided to pick up a pizza from Target and we went out to the lake to eat lunch, yell at the ducks and wait for it to be time to go pick up T. 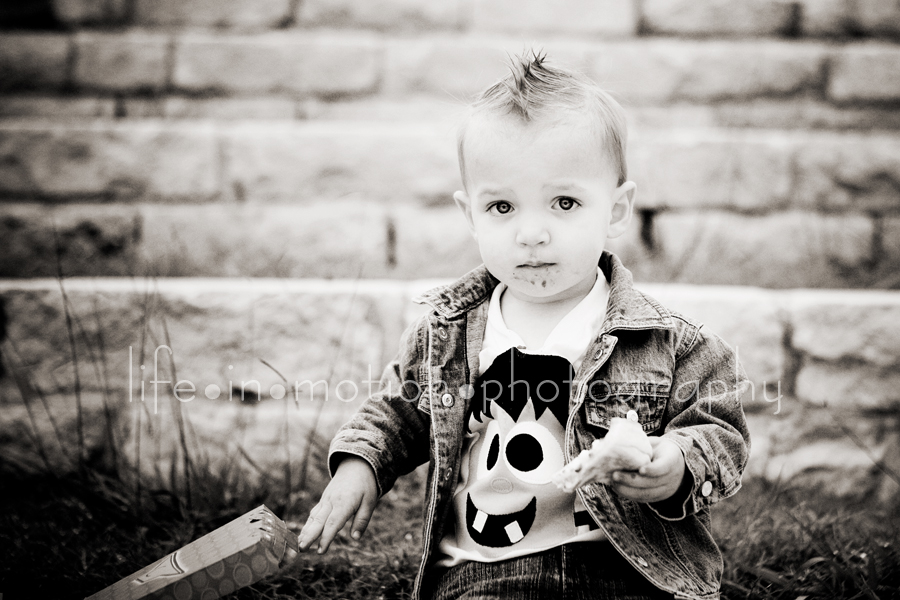 5.  Even with all of our duck calling, we were still a few minutes early to pick up Taryn so we played on the playground outside her classroom.  Teagan was all over the slide….

6.  What ensued just a few moments later will go down in history as the motherload of all toddler hissy fits (to date) at our house.  I told him to go down the slide one more time and then we would go inside and get his sister.  One more time came and went so I grabbed his chubby little hand to lead him inside.  He immediately turned into limp noodle baby and hit the dirt.  I tried to pick him up and he went from limp noodle baby to 2×4 baby is 0.03 seconds flat.  I’m trying to calm him down and tell him we’ll come right back out to the slide after we get Taryn….we’ll come back to the slide, come on buddy, let’s go find Taryn!  Nope.  Not.  Having.  It. He wiggled away from me, arms flailing all around, feet kicking, flops himself over, face down in the wet mulch and starts making an angry toddler mulch angel.  I rode it out for about 45 seconds then started talking to him again in a calm voice.  He got up, only because he was mad he was all muddy and his arms were covered in mulch (which he hates, even though he loves to dig in it at home, go figure).  At this point I look up to see a few other moms standing around and grinning that all knowing “oh I’ve been there” smile.  I marveled at the mulch angel and his form for a second, considered taking an iphone pic of it, then noticed he was composing himself and didn’t want to risk another meltdown.  I started walking towards the classroom.  Thankfully Teagan followed right behind after I took a few steps, mad about the mulch, shaking his head and finger “no no” and fussing at me.  Yeah dude, whatever, totally my fault?!  Anyone want to share a good hissy fit story??

7.  I think we need to start using a chore chart with Taryn.  Maybe this one.  She’s not into doing her chores here lately just by us asking, I’m thinking she’d be all about a chart though.

8.  The kids and I made Halloween puppets this morning.  A spider, a witch and a Frankenstein.  We’ll be putting on a puppet show for daddy and Ty tonight after I get home from a session.  Can’t wait.  I want to do this project with them soon, just need to find the time!

9.  After our puppet making, I cleaned up, made a few trips to the trash and then found this:

Vaguely reminds me of this on a much smaller scale.  Oh gosh that link cracks me up now.  Then, not so much.  But now, it’s hilarious.  And in case you’re wondering, his favorite word right now is “yeah”. The kid is obsessed with writing, coloring, drawing. He wakes up talking about it quite often, it’s all he wants to do.

10.  I saw this amazing video posted on facebook a few times and cried like a baby each time.  Heartbreaking, emotive and yet another reminder for all of us to get in the picture.  Photos are our tangible memories.  When we’re gone, they will remain.  Get in the picture people.  I’ll be taking my own advice this weekend when our family photos are taken.  And I don’t even care if I look chubby, or if my hair is flat….my kids will have photos of me happy, involved, LOVING THEM.